One place to work all claims

Continuously monitors your billing software looking for batched claims that are ready for submission to payers.

Validates claims and prevents potential rejections and denials prior to submission so you get paid faster.

Presents scrubbed claims prior to submission and claims that have been rejected/denied all on one screen.

Claims Manager monitors your practice management software looking for claims that have been batched and are ready for submission to payers. Claims Manager then produces a HIPAA compliant ANSI 837 claims file and routes this file through the Encoda Claims Scrubber. Offending claims are removed from the batch, and the remaining clean claims are submitted directly to the payers. Unlike a traditional clearinghouse which combines claims for multiple clients (many times hundreds of clients at a time), Claims Manager monitors each client’s payer submission individually for a corresponding acceptance (the ANSI 999 transaction). This transaction is typically available within an hour or two of submitting the claim file. Claims causing a rejected batch at this stage are automatically removed from the batch by BackOffice, and the claims file is resubmitted to the payer until an acceptance is received. Once claims files are received and accepted, Claims Manager then monitors each payer for individual claim status responses (the ANSI 277 transaction) and if no such response is received within a reasonable (client defined) time period, Claims Manager will trigger a claim status request, soliciting a response.

Claims Scrubber validates claims prior to submission to each payer, greatly increasing the likelihood of being paid in a more timely and accurate fashion. This can have a dramatic impact on total revenue and reduce the total number of days in accounts receivable. Fully integrated with your PM software, Claim Scrubber includes NCCI, LCD, NCD, and MUE rules, ICD-10/CPT mismatches, as well as identifying overlooked CPT codes. Also included are payer specific bundling and frequency rules, and custom demographic scrubbing which ensures that the basic elements of each claim are valid and correctly formatted.

Claim Scrubber will re-order claim charges based on client-specified rule sets, allowing the maximum reimbursement for your practice. Without halting the claim, Claim Scrubber can re-order the charges automatically. Common billing mistakes can be added to your claim scrub routines; these can then be displayed in Exception Manager for review or, in many cases, automatically fixed and submitted without user interaction. Claims Scrubber will reduce the amount of time your staff spends on claim review and working denials.

Exception Manager™ is a powerful, yet user friendly interface with a work queue that billing staff use to quickly view claims that require attention. This includes both claims that have been scrubbed and pulled aside prior to billing the payers and those claims that payers have rejected/denied that require possible rework. Encoda BackOffice captures all information sent to a payer and received from a payer over the life of a claim. All claim corrections and notes entered into BackOffice are automatically updated in your PM software. This enables your staff to quickly resolve claims, rebill, and move on to additional claims that need attention. The information corrected on the Exception Manager resolution screen not only fixes the claim but updates your PM master files so all future claims are addressed as well. This can eliminate thousands of potential claim errors. Additionally, claims can be routed by dozens of criteria to the staff member most qualified to handle the offending claim, and individual claims can be purposefully assigned to specific individuals with an audit trail of who assigned which claim, to whom and when.

Constantly monitors each of your payers for available remittance files and retrieves payment information without staff involvement.

Automatically monitors each of your payers to make sure no claim reimbursement is left behind.

Payment Manager continuously monitors each of your payers for available remittance files and retrieves these files without staff involvement. Payment Manager interacts with your practice management software and payer data in a more profound manner than any other posting system. Payment Manager builds a dynamic relationship between claims forwarded to each payer and the insurance master tables in your PM software.

Payment Manager allows for partial posting of checks which contain minor issues, enabling clients to post the bulk of their money while minor discrepancies in the remittance file are resolved. Payment Manager catalogs all payer claim adjudication codes (CARCs and RARCs) for the management of COB documents and detailed denial analysis. Each code has associated actions that can be defined by the practice, allowing Payment Manager to automatically react to diverse situations.

Watchdog™ protects your system from billing loopholes, ensuring that your claims are pursued to the greatest possible degree. Whereas Exception Manager queues for your staff those claims that were flagged by the Claim Scrubber or claims that a payer has denied at some point in its lifecycle, Watchdog alerts staff when claims reach a threshold where something should have happened but did not happen. It can also create additional rules to monitor and react to problems in your billing system. Watchdog ensures that no claim is left behind and makes it possible for our clients to capitalize on every opportunity to collect revenue. As much as 10% of claims never make it to an explanation of benefits (EOB). Traditional practice management systems and clearinghouses regularly lose track of claims, improperly marking these claims as billed in the practice management system, with claims simply dropping into a black hole, having not been paid, denied, or adjusted. Issues of this magnitude grow progressively more difficult to correct as time goes by. Traditional medical billing software such as PMs are limited in scope, and unable to react to and report on events outside of standard reporting parameters. Only a preventative system, like Encoda’s Watchdog, can catch these problems before they become insolvable.

Maestro Analytics™ is comprised of two components, an always available (24×7) user-friendly, web-based dashboard that enables Encoda clients to access key financial and performance metrics using a PC, Mac, iPad, Android tablet, or mobile device using either iOS and Android devices, and a robust data mart containing every financial record ever processed by your billing software and every payer transaction that has passed through Encoda BackOffice.

Organizations that manage the revenue cycle for more than one medical practice can, with a single mouse click, view key financial and performance metrics cumulatively for all practices (aka all clients), a custom grouping of practices, an individual practice, or an individual provider.

Our analytics team is ready to assist you by creating the data extracts and analyses that clients require in order to most effectively manage their businesses. The Maestro Analytics data mart enables users familiar with Microsoft Excel to analyze a massive quantity of medical billing data quickly and easily. Maestro Analytics’ feed of data for pivot tables allows users to comprehensively analyze and report on data based on most any parameter within their system. In addition to analyzing financial performance, both the Maestro Analytics dashboards and data mart enable clients to understand how staff are performing. Dashboard examples below enable your management team to monitor the work being done in Exception Manager.

Encoda’s Claims Manager constantly monitors your practice management system looking for charges that have been entered and ready to be paid. Encoda retrieves these claims, imprints our proprietary “fingerprint” technology on each line item on every claim, then inputs these claims into Encoda’s claim scrubber. Our claims scrubber features the industry’s most robust technology utilizing a database of payer and specialty specific claim edits (LCD, NCD, MUE, and NCCI), historical edits including global periods, bundling and frequency counts, claim structure edits and client specific edits. The claims are scrubbed against this database (which is updated daily) and those claims that are ready to be paid are sent to the payer, while remaining transactions that require staff attention are routed and queued in Encoda’s Exception Manager for the appropriate staff member to work.

Exception Manager presents only those claims that need attention allowing your staff to focus on editing and correcting any claim issues before being re-billed. Once a correction is made to a claim in Exception Manager it is automatically corrected in the PM system.

Encoda BackOffice waits for responses from the payers, and once received, automatically records responses in the system and transfers the claim to the appropriate queue based on the response from the payer.

Encoda’s Watchdog continuously monitors the BackOffice system ensuring that responses are received for all claims submitted. In the event a response is not received from a payer or a claim has not yet been adjudicated, Watchdog automatically sends a notification to the payer requesting a status update/payment. These claims are all seen in the Watchdog queue. 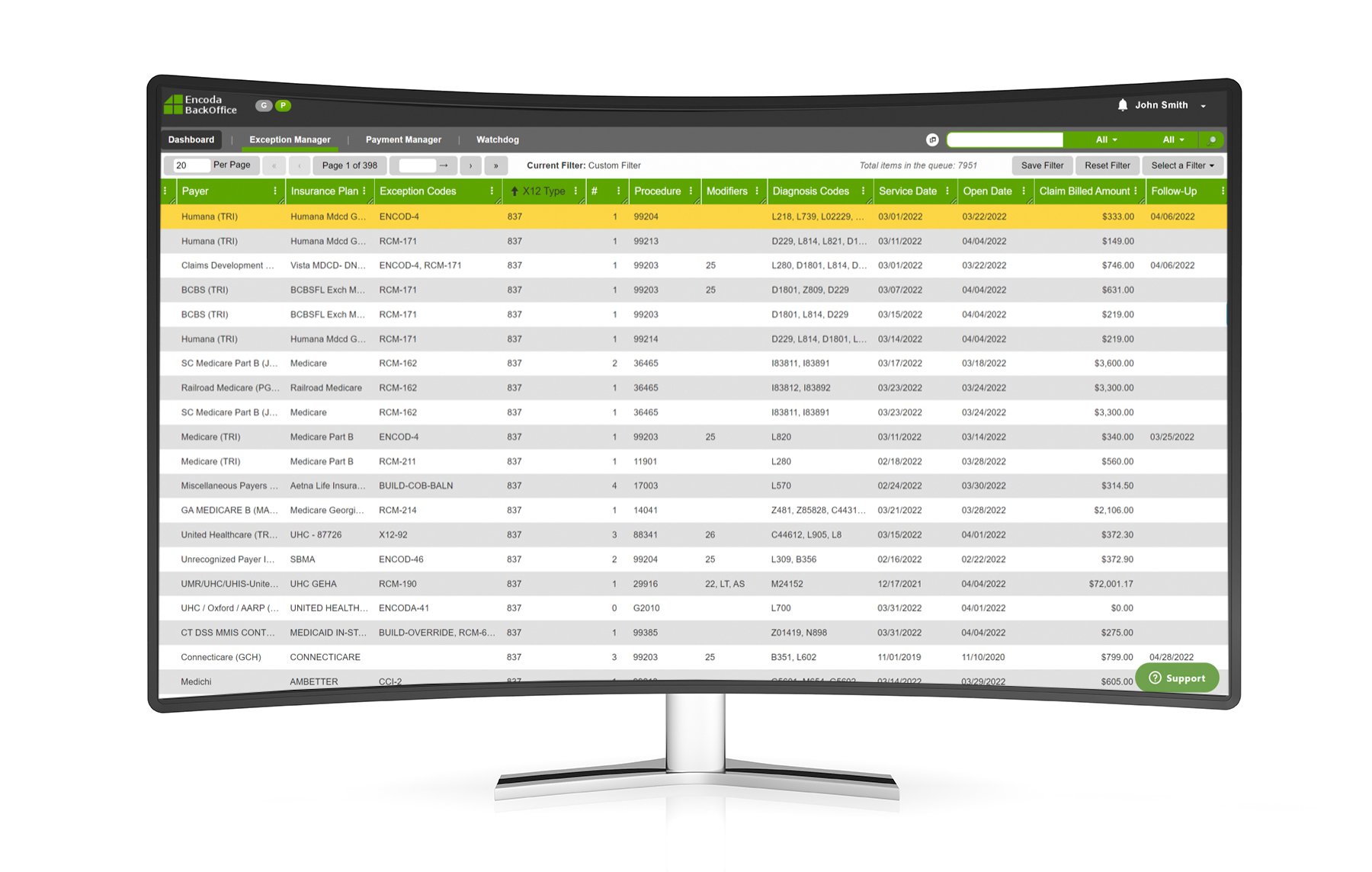 “We’ve been using Encoda BackOffice for 90 days. BackOffice had an immediate impact on our billing dept. We had 3 A/R employees and we’re now down to 2. We had 2 payment posters and we’re down to 1.

There were lots of BackOffice rules that we implemented and it has helped our claims go out cleaner and has streamlined our posting. The Encoda support team has been awesome. They call us to let us know we’ve got an issue with a claim before my team even sees it. I’m sure there is more we need to learn but what we have experienced so far has been nothing but greatness!”

We were really at the end of our rope. Whether it was billing or running reports, everything of any value we did in our existing billing software and clearinghouse involved an agonizing process. But thanks to Encoda BackOffice, our productivity has skyrocketed! Today we bill for more than 130 providers with a staff of just 10 employees.
The Encoda BackOffice system connects to our existing practice management billing software.  Additionally, Encoda has absolutely the best support we have ever had. When we need them they are always there for us.  I know this sounds like an ad, but it’s the truth. Thank you, thank you, Encoda.”

“We purchased our practice management system because Encoda BackOffice is fully integrated with it.  We bill for 20+ providers, and have re-engineered our central billing office around the Encoda platform. BackOffice has completely revolutionized how we go about claim submission, payment posting, and claim follow-up.
Patient copay reallocations and payer recoupments are all handled automatically by the Encoda BackOffice platform.”

“Encoda provided true scalability to our billing operations.  We were seeking a ‘rules engine’ to automate the many manual performed repetitive keystrokes typical in most billing settings. As a result of Encoda BackOffice, our system is now ‘smart’; automating the mundane and freeing up our staff to spend time only on issues which truly require judgment.
We support 30 providers with only 3 FTE employees handling billing, posting and follow-up.  Encoda BackOffice has been able to do everything they claimed it would do – and that’s not something I can say for most other software I’ve ever implemented!”